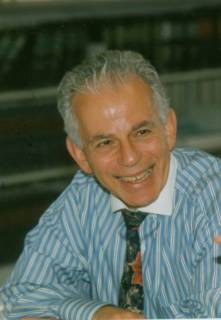 A photo of Justice Gilbert

Posted by Justice Arthur Gilbert at 2:15 PM No comments:

Column By Presiding Justice Arthur Gilbert
I was walking down the street talking to Tom Crosby a few days ago. He was his usual self, railing about a case with which he disagreed. “The issue has the circumference of a medicine ball and they missed it.”
“You are getting excited Tom,” I said.
“Of course I am. I love talking, thinking, shaping and writing about the law. That is something to get excited about.”
“Hey Tom,” I said, “People will think I’m nuts. It looks like I’m talking to myself.”
“I like that,” said Tom. “But not to worry. People probably think you are talking on a cell phone.”
“But I’m not holding a cell phone.”
“I love it. If people don’t think you are a little nuts, or highly unusual, then you are probably not doing your job.”
Here I am walking down the street and talking to Tom Crosby. Newspapers say he passed away last month. Tom would be the first to say not to believe everything you read in the papers, or elsewhere for that matter. If you asked him if that included his own opinions, he would give you his signature Crosby smile, almost sardonic, but not quite, because of the twinkle in his eyes.
“There are exceptions for the exceptional,” he would say.
In the case of the articles about Tom’s passing, I don’t believe entirely what I have read, not because Tom says so, but because here I am talking to him. I hear his voice, his inflections, his wry humor, his contempt for artifice and empty slogans, his insistence on rigorous analysis and thought. People like Tom don’t merely “pass away.” Tom is still there, in your face, challenging you to think and to be honest. His engaging and lovely wife Patty will bear me out on this. I had the good fortune to spend some stimulating and joyful hours with Tom and Patty.

Posted by Justice Arthur Gilbert at 1:27 PM No comments:


Posted by Justice Arthur Gilbert at 1:01 PM No comments:

Justice Arthur Gilbert
Justice Arthur Gilbert is the Presiding Justice of Division 6 of the California Court of Appeal, Second District. By day Justice Gilbert presides over his cases with quiet but firm dignity. The evening is a different story. He sheds his robe to become a probing columnist on a tireless quest to reveal little known facets of the justice system. For over two decades Justice Gilbert has written his column for the legal newspaper, The Los Angeles Daily Journal to a confused but devoted readership. This blog site contains selected columns from the more than 200 that have appeared in past editions of the Daily Journal. Gilbert's books, "Under Submission" and "Under Submission Volume II are available on Amazon.com